ANDERSONVILLE — Celebrities from Snooki to “Sexiest Man Alive” Adam Levine have their own fragrances.

Now you can, too. 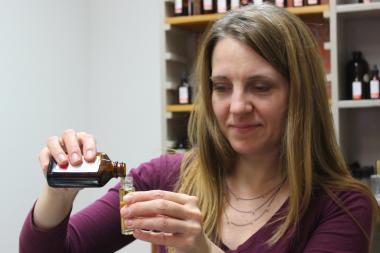 Belly up to the perfume bar, where Sauhammel stocks not only ready-to-wear fragrances but dozens of essential oils, botanicals and natural aromas, any of which can be combined to reflect the wearer’s taste and personality.

The first step in the process: “I try to read a person’s energy,” said Sauhammel, 43. 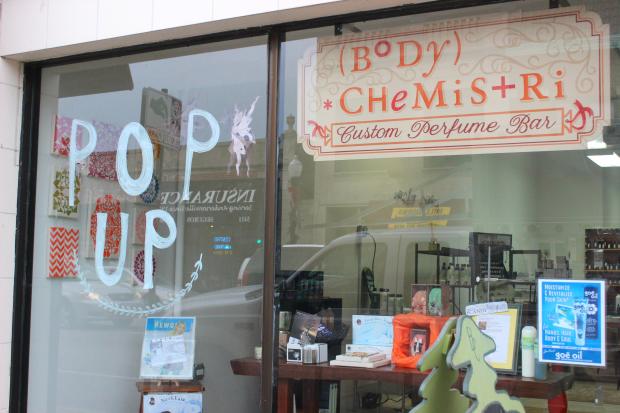 “I might read if someone has a softer personality. They might want a scent more comforting that protects their space,” she said. A more gregarious person might opt for a bolder scent that announces their presence in a room.

Body Chemistri’s name aside, Sauhammel likens the blending of scents to cooking more so than chemistry.

“Putting fragrances together is like putting flavors together,” she said.

There are “bass notes,” which are the longest lasting aromas, and “top notes,” which tend to be the first scent people notice in a fragrance, but are also the most fleeting. Fragrances also change over time, the longer they’re worn, she said. 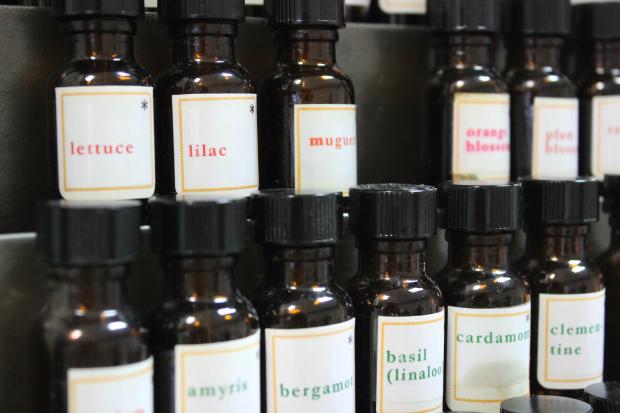 Using traditional French perfume-blending techniques, Sauhammel layers custom fragrance combinations on paper scent strip samples. Once the client approves the perfume, she or he gets to name it and Sauhammel keeps the formula on file, for that person only.

“I think this is a simple indulgence,” she said, with a one-third ounce of custom perfume costing $48.

Single note scents — i.e., a lone scent such as vanilla or rosemary — cost $20 for one-third ounce.

Andersonville resident Megan Crayne made a stop at Body Chemistri while walking home from Hamburger Mary’s, lured by the promise of a personalized fragrance.

A fan of patchouli — an often polarizing aroma — Crayne was in search of a less intense version of the scent, which a friend’s brother had told her “smells like old people.”

“I asked if there was some way to make it a little toned down,” said Crayne. “She mixed it with tuberose and a couple drops of almond. It has a sweet overtone.”

Crayne had seen similar custom-scent setups at street fairs where people are encouraged to mix their own fragrance, but never a store like Body Chemistri, where she said Sauhammel’s expertise made all the difference.

“I have no idea what goes to together, I wouldn’t know what to do,” Crayne said.

Sauhammel has been studying perfumery since she was a teenager when she began working part-time for Body & Soul, a River North shop that was the precursor to Body Chemistri.

Taking over from Body & Soul’s original owner, Sauhammel ran Body Chemistri as a brick-and-mortar business in Evanston for several years and then briefly on Southport Avenue before turning the operation into a solely mail-order enterprise the past five-plus years.

“I’ve sort of been on a sabbatical with it,” said Sauhammel, who lives in Lincoln Square.

Yet over the years, she’s maintained connections with a number of long-time Body Chemistri fans.

Esther Weiss is one such devotee. She’s been relying on Sauhammel for fragrances for more than a decade.

“She seems to know what I like and don’t like. She’s very intuitive, which is very Heidi, and part of what I like,” said Weiss, who recently moved from Evanston to Madison, Wis., and places her orders with Sauhammel over the phone.

“Heidi has mixed some terrific presents for folks. She mixed a wonderful blend to add to
bath water for a muscle soak for some active friends,” Weiss said. “Part of what keeps me coming
back is the inventive quality of her creations.”

Though Weiss has tried other brands of essential oils, including Whole Foods’, she hasn’t found anything she likes as well as Sauhammel’s.

Next fall, Sauhammel expects to graduate with a master’s degree in oriental medicine from the Midwest College of Oriental Medicine, and opening a new store is high on her to-do list — the pop-up is a way for her to gradually dip her toes back into the daily grind of running a storefront.

There are new trends in fragrances to follow, which seem to be leaning toward “darker and more sensual,” she said, incorporating tobacco, balsam and vanilla scents.

Consumer culture has also changed rapidly in the past few years.

“It’s such a different world from when I had a store before,” said Sauhammel, pointing to the rise of sites such as Etsy, Pinterest and social media.

Ideally her next venture would incorporate her newly gained knowledge. She hopes to offer acupuncture and herbal remedies in addition to aromatherapy and custom scents, “moving more into a wellness direction,” she said.

“You better believe I’ll be in her shop. That’ll be a destination,” said Weiss, who vowed to make the trip south whenever Sauhammel’s vision becomes a reality.

Until then, Sauhammel is pleased with her temporary digs in Andersonville.

“It’s been a really positive reception,” she said. “It helps placing myself in a neighborhood where people are looking for more unusual things as opposed to brands.”